It's movie night at my kids' elementary school. There are 100+ kids in pajamas sequestered in a dark room, all ginned up on hot chocolate and cookies, and coming to the end of a movie about the power of “belief”.  Or maybe “The Polar Express” is about something else, I honestly don’t know because I had my head and hands inside a hot box of swirling, buttery delight all night, popping and bagging popcorn to provide a salty counter-balance to the evening’s sweeter treats.

Suddenly, towards the end of the film I’m approached by a woman so sweet looking that she can only be described as a young Ms. Claus in street clothes. I'm told that they have a Santa costume, but no Santa. I’m also told that they have been planning this event since approximately 1952, but that somehow things are just coming together at the last minute.

So I agree to wear the outfit under the premise that I will just do a quick walk-thru shouting “Merry Christmas” and “Believe” and things of that nature.  Upon glancing through the bag of clothes I realize that there is no jolly belly cushion as part of the costume.  After a brief moment of self-loathing and a glance at my own admittedly expanding waistline, I regain my confidence and assume that the lack of the cushion is a simple oversight.  I relay this condition to the person in charge and receive a slight look of shock followed by a promise to quickly remedy the situation.  She comes back moments later with four very square seat cushions.  It’ll have to do.

At the appropriate moment, I’m told it’s Go-Time and I stealthily retreat to the boy’s bathroom across the hall.  Inside I find one bath stall already occupied by a child, so I slip into the handicap stall next to him like Clark Kent heading into the phone booth.  Backed into the far corner so the young boy next to me doesn’t detect the transformation occurring so close to him, I quickly unpack the bag and pull on the red felt suit.  Clean as I’m sure it was, wearing another man's beard will never be something that can be described as “sanitary”, so giving quick thanks for my own olfactory deficiencies, I pulled the elastic loops over my ears and situated the weird mesh onto my face.

At this point, having made the full transformation in under two minutes, I realize that I don’t honestly know what my queue for arrival is to be and that (all the other participants in this event being female) no one is at liberty to come in to the boys room and check on me.  Plus little Johnny is still in the stall next to me working out his excessive candy intake from the night.

So I try to text my wife telling her that I’m ready to go and don’t know what to do.  But in the confines of the concrete block bathroom, there is no way for the cellular waves of my SOS to escape and reach their intended target.  Feeling increasingly trapped I resend my message and to my delight see that it has gone out.  But knowing the decibel level of my wife’s current environment inside the cafeteria, I still have no assurance that it will be received.  I do not get a return missive.

At this point I hear another young man enter the bathroom and I crouch even further back into the corner for fear that the newcomer will see my Santa boots under the door or my red suit through the crack in the door. I hear him try the door of the stall beside me (still occupied) and then the door to my own stall shakes violently.  After a few seconds of silence I release my held breath, believing I’ve escaped discovery. Then, like an alien bursting forth from Kane’s chest, the child thrust his head under the door in an attempt to climb into the stall he obviously thought was empty due to the lack of shoes flanking the porcelain toilet base.  My shocked reaction was to simply extend a foot in an attempt to block his entry as I frantically said, “Someone’s in here!” The child turned his head up to see, what will surely become the thing of nightmares, the bottom of a boot in his face and a strange creature dressed like Santa cowering in the corner of a bathroom stall.

His hasty retreat was soon followed by the sounds of a gathering crowd in the hall outside the bathroom.  He had obviously gone to tell every stranger and acquaintance he met along the way that he had just discovered, in the absence of a chimney, Santa can also enter any given space through the plumbing lines.  Or maybe that he knew Santa was really just the popcorn guy.  In any case, all I heard was increasing chatter and laughter outside the bathroom punctuated with an adult’s commands to “stay out of the bathroom” and “you’re a girl, you can’t go in there anyway.”

At this point it was clear that the jig was up and I was being beckoned forth.  I emerged from my cloistered cubicle and entered the cafeteria to a cacophony of squeals and cheers.  Ho Ho Ho!

If you ever get a chance to wear the red suit, take it.  It will surely be more of an experience than you could ever imagine.

LissaJ said…
Thx for today's belly laugh. Wish that kid had a cell phone. Would love to see a pic of Stall Santa from the perspective of the bathroom floor.
December 3, 2018 at 7:54 AM 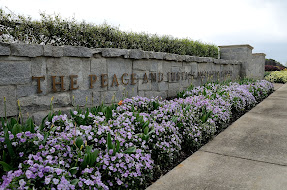 The Peace and Justice Memorial